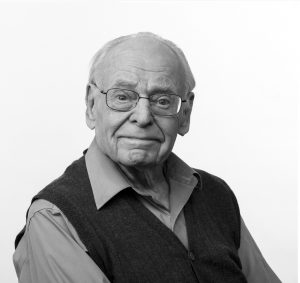 Richard Parker
Chairman of the Board

After graduation from High School in 1944, Richard attended Cornell University where he studied chemical engineering. He only attended Cornell for six weeks when he was called up by the Navy in October of 1944. While in the Navy, he spent eleven months in engineering training in electronics. He was discharged from the Navy in the summer of 1946 and immediately returned to his studies at Cornell.

Upon graduation from Cornell in 1950 he went to work for Ferricore, a company in Yonkers, NY. There he did general engineering work as well as selling ferrites. During his sales career he met Edmund Stanwyck who in turn introduced him to Mr. Jack Webb. Mr. Webb owned Magnetic Core Company in Newburgh, New York.

Mr.Stanwyck suggested they start a business together. Mr. Webb became an investor and the three men formed a partnership in October of 1952 in Wallkill, New York. According to Richard Parker, the name Fair-Rite was a play on words that Ed Stanwyck created.

From 1952 through 1995, Richard Parker was Fair-Rite’s President. He successfully  lead Fair-Rite to be the largest ferrite manufacturer in the United States. That still holds true today. In 1995, Mr. Parker stepped down as President and into the role of Chairman of the Board.

On June 10, 2016 he passed away peacefully at his home. He was an innovator, entrepreneur, and pioneer in the ferrite industry. Without his ingenuity and persistence, Fair-Rite would not be Your Signal Solution® today.