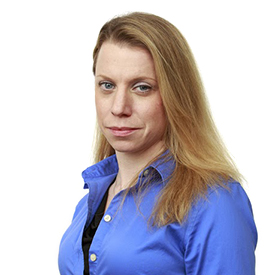 Rachael, daughter of Carole and Richard Parker, joined Fair-Rite as their Vice President in July 2014. Although she oversees many operations within the company, Rachael is focused primarily on the marketing aspect of the business.

Rachael started as an electrical engineer at 3M designing circuit boards and developing algorithms. After gaining some experience in the lab, she became a DFSS Black Belt and learned the tools and techniques of Six Sigma and Lean manufacturing. Using the knowledge she gained through work and additional education, she lead cross-functional development projects, which involved interacting with customers, engineers, and manufacturers all over the world – including the United Kingdom, China, Taiwan, and Japan.

After her time at 3M, Rachael went on to work at Oracle where she became the Engineering Program Manager for a new server product. During this development cycle, she was the conduit between external manufacturers and engineers. Here, she gained a better understanding of inter-company and inter-departmental communications as she managed large prototype builds of servers both domestically and internationally.